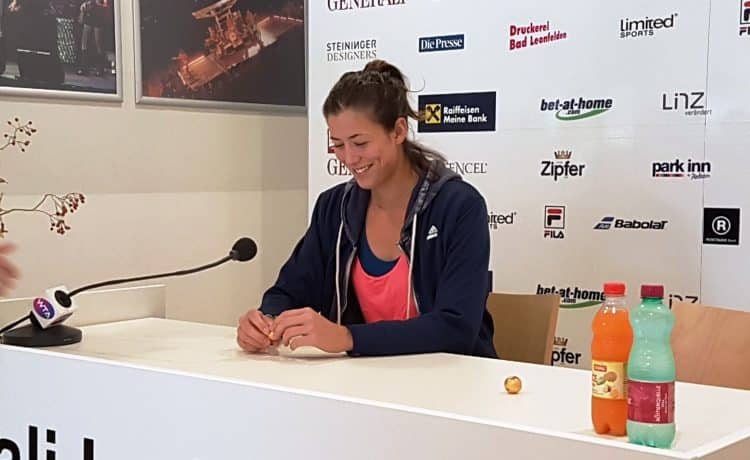 Having arrived in Linz the day of her birthday, Garbine Muguruza was welcomed by the tournament with a big Linzer Torte, the speciality of the city and oldest cake receipt in the world. The smile that welcomed the surprise has not faded after two days and the Spaniard looked relaxed and happy when facing the press on the first day of a very packed WTA Linz. Until a few days ago, Linz was not on her schedule, but things changed rapidly after the results in Beijing spiced up the race to the last sports at the WTA Finals of Singapore and so put her qualification at stakes. Nonetheless, the Roland Garros champion walked in the media room with a very relaxed attitude:

“It is my first time here, actually”, she said: “I am really happy to play a new tournament for me, even though it is a last minute decision, thanks to Karolina (Pliskova) withdrawing, but I am excited to play here!”

“For me it is not as exciting as for you guys!” she commented on her position in the fight for that ticket to the finals: “but I think it is fun and I know it is going to be tough. We don’t know what is gonna happen, but this is the reality and this tournament has become a very important tournament for everybody. Obviously there are four girls for three spots, but I am going to try to do my part in this to not depend on luck”.

Part of the reason why she looks in a good mood is due to being back to her home soil. After her defeat by the hands of Petra Kvitova in Beijing, she flew back home and spent some time with her family. “I am surely happy to be back home”, she explained: “obviously the Asian tour is the most different from our culture, so after being for a month there I am happy to be back and it’s always nice to feel that fresh feeling of a new tournament… but it is going to be a tough one, because I don’t think I have never seen a harder International tournament! So it is going to be interesting for everyone: for the public, for the press and for us!”

The tournament, indeed, feature four top 10 players and the last seed, Laura Siegemund, is inside the top 30, which is not very usual for a WTA International. But first seed Muguruza, who will debut against Cagla Buyukakcay, does not want to know anything about the draw: “I don’t know who I am playing in the first round! I know I am up in the draw… (laughs), but I don’t want to know, because I normally wait for my coach to tell me. I definitely don’t wanna know 5 days earlier, so don’t tell me!”

Her spirit did not drop even when the topic got more serious and she carefully explained the way she deals with expectations and the defence of previous titles, something she had just experienced in Beijing: “I think everybody is thinking about the points I have to defend and such, but with the time, you think less about that. You think more about your objectives and the likes of ‘I dream to win this’ and how I need to prepare for the important tournaments. I definitely don’t think ‘last year I did well here and, man, I gotta play good!’ because there are parts of the year when I am playing well and doing the results I want and parts where I don’t do as good. Last year I played well in Asia, this year not as much, but hopefully I can make it up in another part of the season or swing. I think with the time you think less about that, whereas when you were young you stress so much about that, but with the time it doesn’t matter”.

For someone who admittedly loves strong emotions and finds the life outside tennis to easily get boring, she appeared to be very relaxed, even when talking about her life after the dream-come-true success at Roland Garros: “I don’t think my life has changed a lot. Obviously you get more attention, but it is nice to have that. I didn’t change anything in my life and if I look back it was fun and I was very happy because it was a great achievement, but I don’t think about that much. But, I mean, nothing can ruin this year and no matter what happens, I won a Grand Slam this year and that makes it my best season so far. It is a good thing to have and a nice trophy to put in my closet! Well, not closet, but a cabinet!”

However, after that big win, she struggled to keep up her results. In a way, it was similar to what happen to Angelique Kerber after the Australian Open title. However, she believes their cases are different: “I think there are very different types of players: I know that the strength of some players is to be in the semifinals every week, they are super constant and strong in that part. But there are other players who can have an amazing week and it is harder for them to do it every week. I think I am part of the latter group: it is hard to be every week in the semifinals with my style of game, I take a lot of risk and I am very aggressive. So I only concentrate on trying to have the control on my side, if I can do it, I know I can lose, but I know I will eventually win. It is a difficult receipt and I don’t know what’s the secret behind this, but this is what I am looking for”.

So how does she keep the focus when her shots suddenly stop landing in and her risks don’t pay off? “I am just trying not to get mad when it happens”, she answered giggling: “in the end, I know I can miss a lot, so I must accept a lot and frustration will always be there when I miss a ball. But I must try again and forget about the last point, over and over. What I try to do is to be happy on court and stay positive, so that if I miss, I miss, if I win, I win… simple, right? Obviously you always have fear, but you have to play with it and sometimes be fearless, especially with my style of game I must be brave”.

Before the time ran out and she had to go back training to sweat off the “very good, but very heavy” slice of Linzer Torte that she had, there was time for one last funny answer on where she will spend the well deserved holidays at the end of the season:“I don’t even know which tournament I am playing next, let alone holidays! All I know that I will go home and rest, I don’t want to take another flight, not even to the Caribbean!” 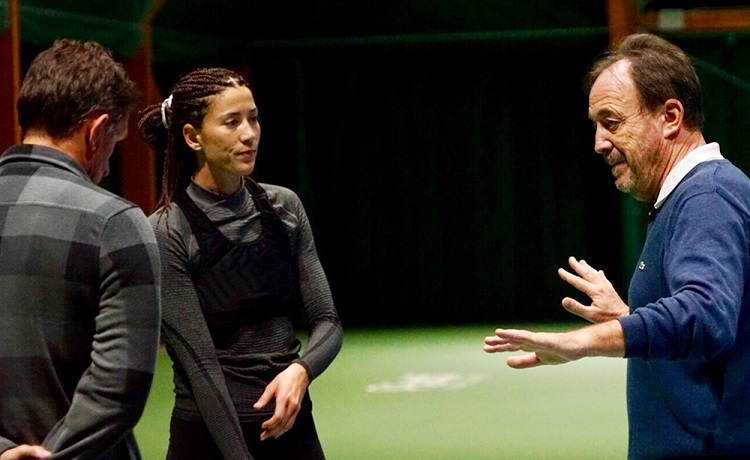 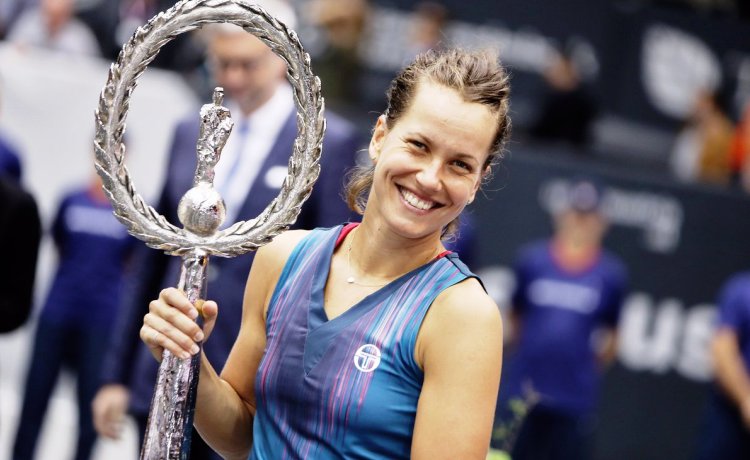