Not every month is alike and this April represented something new in the panorama of tennis writing: no, it is not all about the Sharapova’s doping case, the resurgence of Azarenka and Nadal, it is not just about the upcoming clay season in America and Europe. A little place under the spotlight was taken by Gail Falkenberg, who had to wait more than half a century of passion, hard work and sacrifices to reach a moment of worldwide fame. Not that the 69-year-old was driven by that as motivation, but when she defeated Rosalyn Small in the qualification of ITF Pelham, the case broke all over the internet. Her story is full of passion for tennis and it crossed the ones of Arthur Ashe and Jennifer Capriati, taking her to a locker room close enough to Steffi Graf and Martina Navratilova. For that and a lot more, SpazioTennis.com is offering you this exclusive interview with someone who can be a role model for everyone.

Let’s talk about Pelham. I bet that winning against Rosalyn Small must have surely been a very important achievement for you. Do you want to describe the feelings of that day and what does that win mean for you?
“Winning a match on the pro circuit was probably my first goal since starting to play competitive tennis again five years ago. I had to quit my tennis club teaching job in 2003 to care for my bedridden mother who had a major stroke. I did not pick up a racquet again until after she died in 2011. My body was a bit rusty so it has taken longer to reach my goal than anticipated. My hard court scores were very much improving from June on last year. I had beaten a tour player, Spirit Edley, 2-6 6-0 7-5 in our US Open National Sectional Qualifying tournament in June giving me my national ranking of 329. I thought I could beat Ms. Small since we had practiced together, so I was very confident. There should be many more wins.”

Did you imagine that such win in Pelham qualification draw would have had such a spread worldwide? Did that make any difference for you?
“I had no idea the world would go crazy on a pro qualifying win. I did not even know it until I arrived at the club the next day and faced local TV cameras, a call from the London times and all the media requests. I can play better than I did against Taylor Townsend. I even heard there was a betting line on points at 6.5.  65% of betters thought I would get less, 35% more. Well, I fooled them and won 12 points without playing my best.  No way I would only get 6 points – I’m too good for that. I love all the international attention, because tennis is not a major sport in the US.” 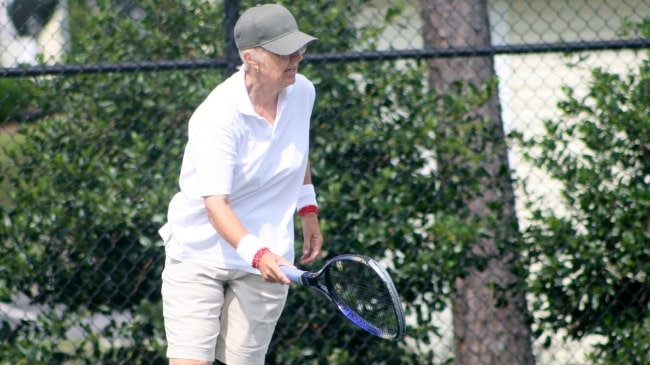 How’s your life as a tennis player? Do you have a coach? How many times do you train? Do you play other sports?
“Playing tennis keeps me young and healthy. I play 5 or 6 times a week and am self-coached. I was also very good in basketball and softball. I went to the University of California at Los Angeles (UCLA) and received my BA and MFA degrees in the late 60’s. There I played on their very first tennis and basketball teams. At the same time Arthur Ashe played tennis and Kareem Jabbar played basketball for legendary coach John Wooden.”

Would you describe your game? What is your main tactic and which are your best shots?
“I have an unusual forehand slice, drop shot, and occasional underhand sidespin serve to keep my opponents off-balance.”

I noticed you use a racquet with a very different shape than the usual one. Why did you make this choice?
“I have several racquets I play with: the Weed (it looks like a snowshoe…), the Head Graphite Director, the Prince Extender, and the Wilson Profile. They are all over 20 years old. I haven’t found a contemporary one yet but am still looking. I use all of them at one time or another, depending on court surface, air density, type of ball used, and my opponent’s game.”

When did your tennis life started? How did you discover tennis and start playing?
“I could always pick up a racquet and play well. Women’s sports were not organized in my youth at the level they are now. ‘Title 9’ in college made a big difference way after I finished. I had a full career in audio-visual production for corporations and the federal government, even owning my own business in Studio City, California. I decided to play tennis again in the 80’s for exercise and suddenly won the 1983 National Public Parks Championship in women’s open singles in Springfield, MO. I also finished second the next year in Vail, CO. So I decided to take a hiatus from my career and went on the circuit from 1985-1990. I attained my highest world ranking of 343 and traveled  the globe, self-funding. I even played Jennifer Capriati in a pre-qualifying event to Amelia Island. She had just won the national 18’s and beat me 7-6 6-4.”

You have been part of tennis world since the 60s. How did tennis change and evolve since then? What do the youngsters do better or worse these days?
“The youngsters today are so much stronger, more fit, and have greater variety in their game. Players did not start playing at age 5 as they do now. And the depth of excellent players is so much more. There is money and notoriety in the game now so coaching plays a greater part. Though, young players need to go a bit slower in their development, and at their own pace. Get a good education while playing, don’t make tennis their only world. It is too easy to get burned out or injured.”

Who are your favourite tennis players (men and women)? Who would you like to face in a match or play doubles with?
“My favorite tennis players are: Vinci, Kerber, Radwanska, and of course the Williams sisters. Djokovic is terrific, and Murray has my ultimate respect for having a female coach. How about playing doubles with either Erani or Vinci? Couldn’t get any better.” 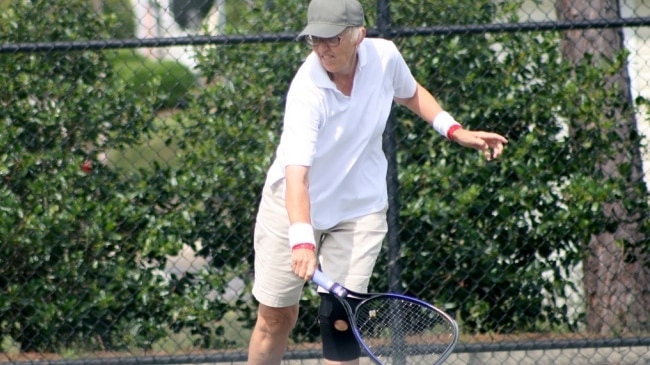 In all these years, which experiences have been the best for you in tennis? Would you also talk about Australian Open 1988, when you won a match in a Slam? How was it to be in a Slam tournament?
“Winning a National Championship as previously mentioned was a highlight. Also playing around the world, staying in local homes, and learning different cultures firsthand enriched my life. For instance, I stayed on a farm outside of Melbourne and took a train into town for the Australian Open. I believe I officially won the first pro match finished on rebound ace in their new facility in 1988. Also shared the locker room with Graf, Evert, and Navratilova – what a thrill!”

What would be a dream to achieve in tennis in this moment of your life?
“I would love to play in the US Open or Wimbledon.  My game is better suited for hard court or grass.”

What do your colleagues (also famous ones) say about your passion and your partecipation to USTA and pro tournaments?
“Most of my colleagues call me an inspiration. Aging is not always fun. One of the US players, Keri Wong, said that I am known as “The Legend” because of my perseverance to keep playing.”

Giving your experience, what would you change in ITF and WTA circuits?
“I think the ITF and WTA do a terrific job, creating a fair system for people of all ages, playing styles, and world locations to compete.”

One last question. Probably you heard about Sharapova’s case about Meldonium. What do you think about this situation?
“You are the first to ask me about the drug situation on the tour. I strongly feel that the ITF and WTA  should increase random testing at all levels, not just the top levels. I know it is expensive and logistically difficult with a world sport but the sport must maintain integrity. The testing must be the most advanced to catch HGH use, steroid use, blood oxygen enhancements, and illegal heart medicine use like Meldonium. Sometimes the drugs are started at a young age without the knowledge of the player or family.  That happened with the East German swimmers who thought they were taking vitamins. Unfortunately, I think penalties should be severe because of the damage done to the sport and other players who compete honestly.”