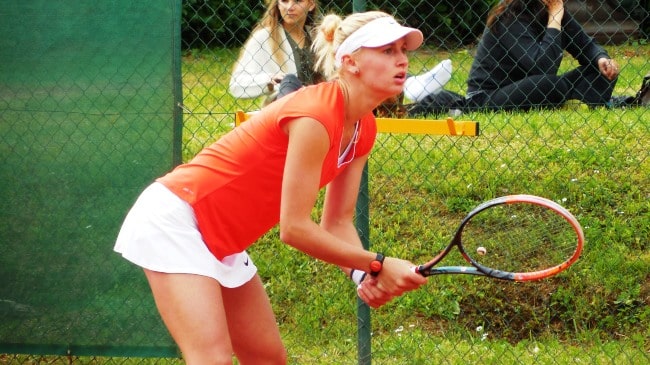 In ChiassOpen, the ITF tournament ($25.000) played at TC Chiasso (Switzerland), one of the brightest youngsters of Suisse tennis won her first round match: Jil-Belen Teichmann, born in 1997, beat Ana Bondar 6-4 2-6 6-0, showing an all-round game and playing a very enjoyable match. Jil, together with Rebeka Masarova, keeps alive Suisse hopes to see an home player in the last stages of the tournament. Here the interview she took with SpazioTennis after her match. Unusually, the first question was by her…

Well, I know English or Italian. I know you speak many languages, what about Italian?
“Yeah, I do. But Italian… I can understand it and I would love to speak it, but I can do only short sentences. And the verbs… verbs are so complicated in Italian!”

So, in English, what about your match today? You needed the third set but you finish in a great way, with a 6-0.
“I knew from the beginning it was going to be a tough match because I know Ana [Bondar] since so long, from juniors tournaments, and we are same age. I just tried to go on court and play my game and it worked pretty ok. Only in second set she played a bit better, I missed too many balls and that made the difference, while in third she started missing a bit more and I made the difference.”

Your tennis is very complete, you like to play on the baseline but you run to the net often…
“I love playing at the net! If I have the chance to go there, I go there. But it depends also on your opponent, if she let play you there or not.”

You won at the net the best point of the match: with broken strings you sliced the ball thrice and then you ran to the net, closing with a very difficult volley on the line…
“Thank you (laugh).”

You are very expressive on court. Is it something that helps you to cope with pressure and to stay calmer and more relaxed?
“You mean when I talk to myself or laugh or…? In that case it’s just myself, cause I’m an happy person (laugh). I’m joking, but time ago on court I was more negative, I was talking too much and in a negative way, but now, most of the times, I just push myself. When you smile everything is more relaxed, like in real life. But it is just the way I am, on court I’m the same person as outside.”

This is the first year you play only pro circuit. What changed and which are main difficulties of this change?
“It’s much different, I played already few times this year and I realized that, but the biggest part of the difference is just mental, cause nowadays everyone you see on court can play tennis at high level, it’s not like 15 years ago when the level was generally a bit lower. So the big difference is the mental approach.”

Your season is going well, you also had a good South American ‘season’ with good results…
“Yeah, it’s ok. I went in South America twice and it went pretty well. I lost three time to the same opponent, Cirstea (laugh)… and this year she is doing very well, so I can be satisfied.”

In a past interview you took with SpazioTennis, in Padua last year…
“…oh dear, what did I say, did I say something bad? (laugh)”

…no no, at the opposite you were wishing for more pro tournaments in Switzerland, and now you have even 2 WTA events, in Gstaad and in Biel. Happy about that?
“Yeah, it’s amazing! I was very happy when I read the news, I hope to have the chance to play them (laugh). Also, it is very helpful for us. I practiced last year in Biel so I know how it is, and Gstaad is like my second home. I have my whole family there and I go in Gstaad every year since I was a kid. I never played in Gstaad now that I think better about it…”

And in Switzerland now also the FedCup team is very strong. Golubic did amazing things.
“I’m very happy for Golubic, she is a good friend of mine and I know how much she worked for that. And in generally we have great players: Bencic, Bacsinszky and of course Hingis. We are lucky, for a little country like ours we are lucky!”

Last easy question: main goals for this tournament and for your season?
“For the tournament, goal is winning (laugh)! But I have to think match by match of course, I know it is not easy, I want to play my tennis and let’s see what happens. About my season, play well and improve my ranking, even if I don’t say a specific number.”

To reach qualification draws of slams for example?
“Yeah, that would be awesome, but if I don’t go there in few months I won’t think it is a failure. I don’t know if I will go in Us Open, but Aussie Open would be perfect! Why not, right?”